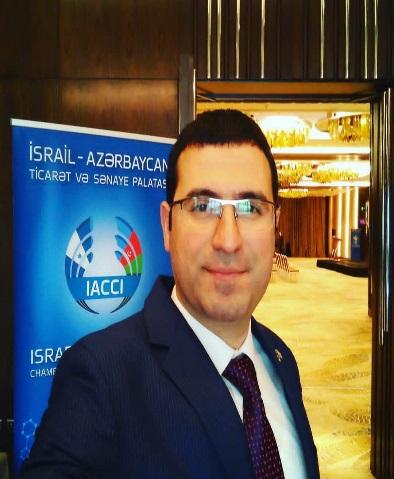 Interviewer questions are in bold, guest’s responses are in plain text throughout.

As a member of the Jewish diaspora, please give us a few words about the latest attack by Armenia in Azerbaijan.

I was born and grew up in Ganja, immigrated to Israel in 2000 and came back to Azerbaijan in 2011 to support Azerbaijan jewish diaspora and bring value to my motherland Azerbaijan. For 7 years I was managing retail sales in Bakcell company,in 2019 I was invited to lead Israel-Azerbaijan Chamber of Commerce and Industry with aim to strengthen business relations among Israel and Azerbaijan.

I was witness of Armenian occupation since my childhood in early 90s when thousands of İDPs were coming from occupied territories to Ganja and other cities of Azerbaijan looking for safer place. All members of Jewish and other diasporas were helping to refugees and wounded people. My father was saying “Doesn’t matter who we are by religion, We are sons of Azerbaijan. It our Motherland”. I would like to note that Jewish people have been living in peace and safety in Azerbaijan for ages.

After occupation, despite UN resolutions, Armenian terrorists did not stop occupation furthermore they continued to kill Azerbaijan citizens during last years by sniper fire and bombing villages. During 30 years Azerbaijan have used all peacefull tools to solve the conflict.

Last attack of Armenian terrorists was last drop. I wish victory to our soldiers, May God have mercy to our Martyrs and soonest recovery to our wounded soldiers and citizens.

Where were you when the rocket was fired at Ganja? Was there destruction or loss?

I was driving to Ganja to visit my parents house and my relatives living in Ganja when I received a call that Armenian rockets exploded in the center of the city and near my parents house. I was extremly shocked by such a act of terror, fortunately nobody injured or killed of my family members. Huge distruction was caused by these bombing, one civilian killed and over 30 people were injured. I wish them fast recovery.

Is there anxiety among people? What is the situation in Ganja now?

People of Ganja have never been afraid of enemy. Morale is on highest level.

Nobody wants to leave and Ganja and fully supports Azerbaijan President and Chief Commander Ilham Aliyev!

Im assured that Azerbaijan government makes all required to support its citizens. I witness it every day.

Ganja is quite far from Nagorno-Karabakh. What is the reason for Armenians targeting civilians from such a long distance?

In my opinion, Armenian terrorists are using same strategy as Nazis during second world war when Hitler realised that he is going to fall started to launch FAU rocket on England. Aim is to create a panic among civilians.

I hope to see real observation and not fake news spreaded by Armenian diaspora in the world. I have a lot of friends over the world whom I describe real situation.Im happy to see every Azerbaijan having access to social network spreading real news and real situation. Qarabagh is Azerbaijan!